You will need a computer with internet access to complete this lesson and the data for week 4 of the course.

Vector data are composed of discrete geometric locations (x,y values) known as vertices that define the “shape” of the spatial object. The organization of the vertices determines the type of vector that you are working with: point, line or polygon.

Data Tip: Sometimes boundary layers such as states and countries, are stored as lines rather than polygons. However, these boundaries, when represented as a line, will not create a closed object with a defined “area” that can be “filled”.

Geospatial data in vector format are often stored in a shapefile format. Because the structure of points, lines, and polygons are different, each individual shapefile can only contain one vector type (all points, all lines or all polygons). You will not find a mixture of point, line and polygon objects in a single shapefile.

Objects stored in a shapefile often have a set of associated attributes that describe the data. For example, a line shapefile that contains the locations of streams, might contain the associated stream name, stream “order” and other information about each stream line object.

You will use the rgdal package to work with vector data in R. Notice that the sp package automatically loads when rgdal is loaded. You will also load the raster package so you can explore raster and vector spatial metadata using similar commands.

The shapefiles that you will import are:

The first shapefile that you will open contains the point locations where trees have been measured at the study site. The data are stored in shapefile format. To import shapefiles you use the R function readOGR().

You can call each element separately

Or you can simply include the entire path to the shp file in the path argument. Both ways to open a shapefile are demonstrated below:

When you import the SJER_plot_centroids shapefile layer into R the readOGR() function automatically stores information about the data. You are particularly interested in the geospatial metadata, describing the format, CRS, extent, and other components of the vector data, and the attributes which describe properties associated with each individual vector object.

Key metadata for all shapefiles include:

You can view shapefile metadata using the class, crs and extent methods:

Your sjer_plot_locations object is a polygon of class SpatialPointsDataFrame, in the CRS UTM zone 18N. The CRS is critical to interpreting the object extent values as it specifies units.

In this case, your polygon object only has one attribute: id.

You can view a metadata & attribute summary of each shapefile by entering the name of the R object in the console. Note that the metadata output includes the class, the number of features, the extent, and the coordinate reference system (crs) of the R object. The last two lines of summary show a preview of the R object attributes.

Next, let’s visualize the data in your R spatialpointsdataframe object using plot(). 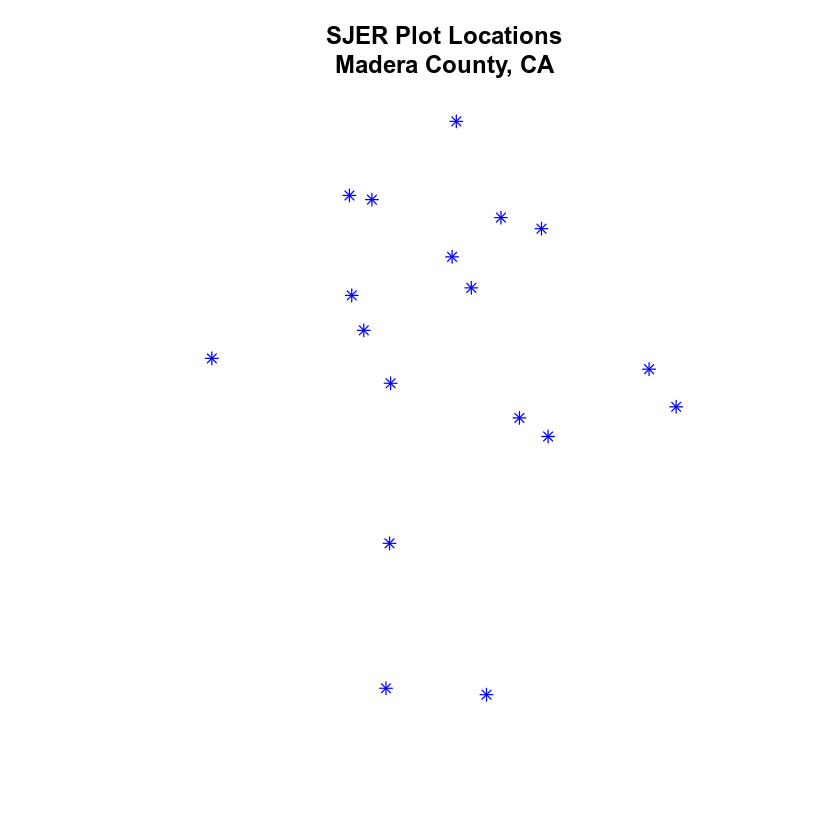 The plot() function can be used to plot spatial objects. Use the following arguments to add a title to your plot and to layer several spatial objects on top of each other in your plot. 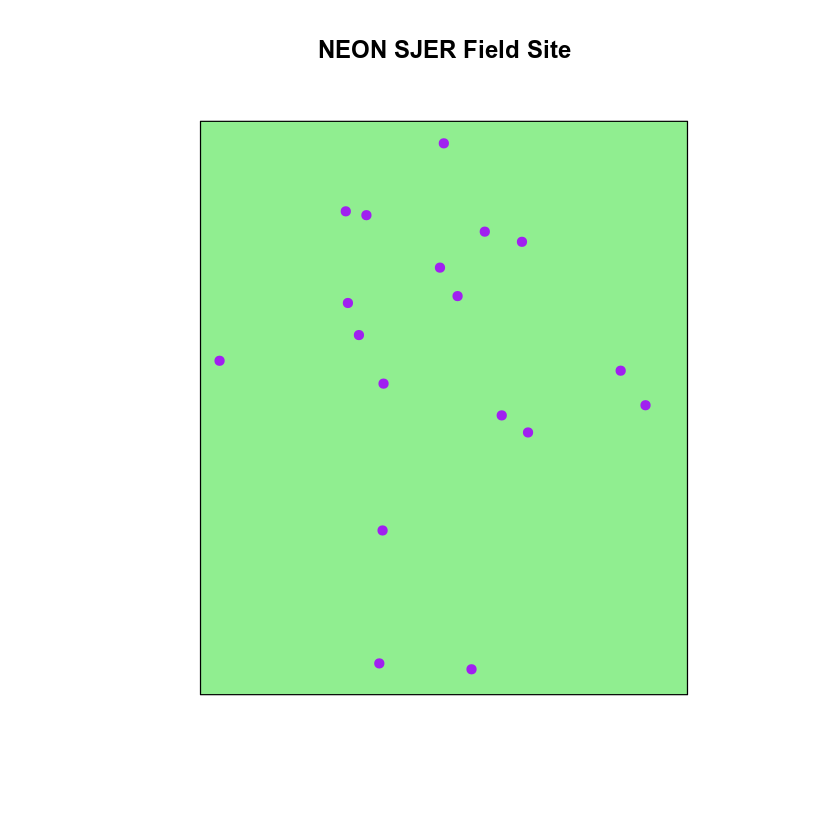 Next, try to plot the roads on top of the SJER crop extent. What happens?

For more on parameter options in the base R plot() function, check out these resources: