You need R and RStudio to complete this tutorial. Also you should have an earth-analytics directory set up on your computer with a /data directory with it.

If you have not already downloaded the week 3 data, please do so now.

As you learned in the previous lesson, lidar or Light Detection and Ranging is an active remote sensing system that can be used to measure vegetation height across wide areas. If the data are discrete return, lidar point clouds are most commonly derived data product from a lidar system. However, often people work with lidar data in raster format given it’s smaller in size and thus easier to work with. In this lesson, you will import and work with 3 of the most common lidar derived data products in R: 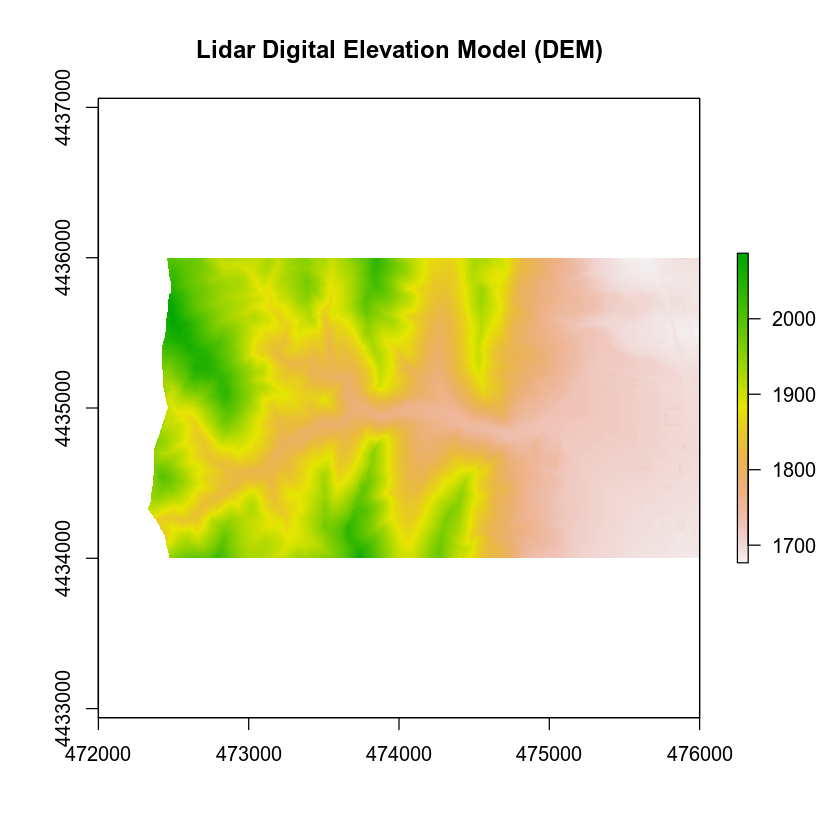 Next, let’s open the digital SURFACE model (DSM). The DSM represents the top of the earth’s surface. Thus, it INCLUDES TREES, BUILDINGS and other objects that sit on the Earth. 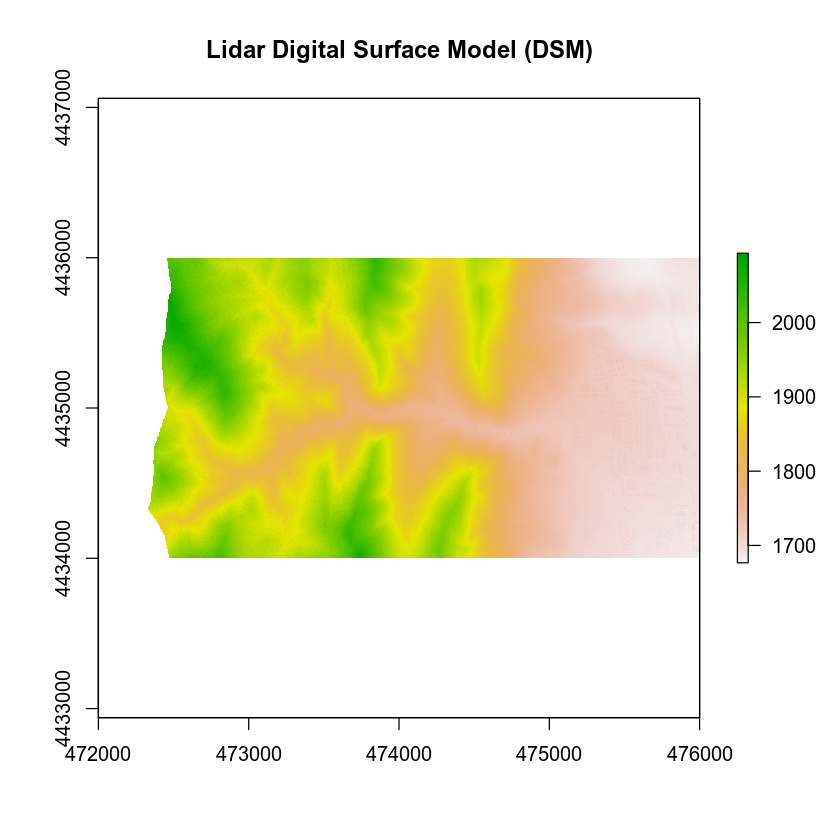 There are different ways to calculate a CHM. One easy way is to subtract the DEM from the DSM.

This math gives you the residual value or difference between the top of the earth surface and the ground which should be the heights of the trees (and buildings if the data haven’t been “cleaned”). 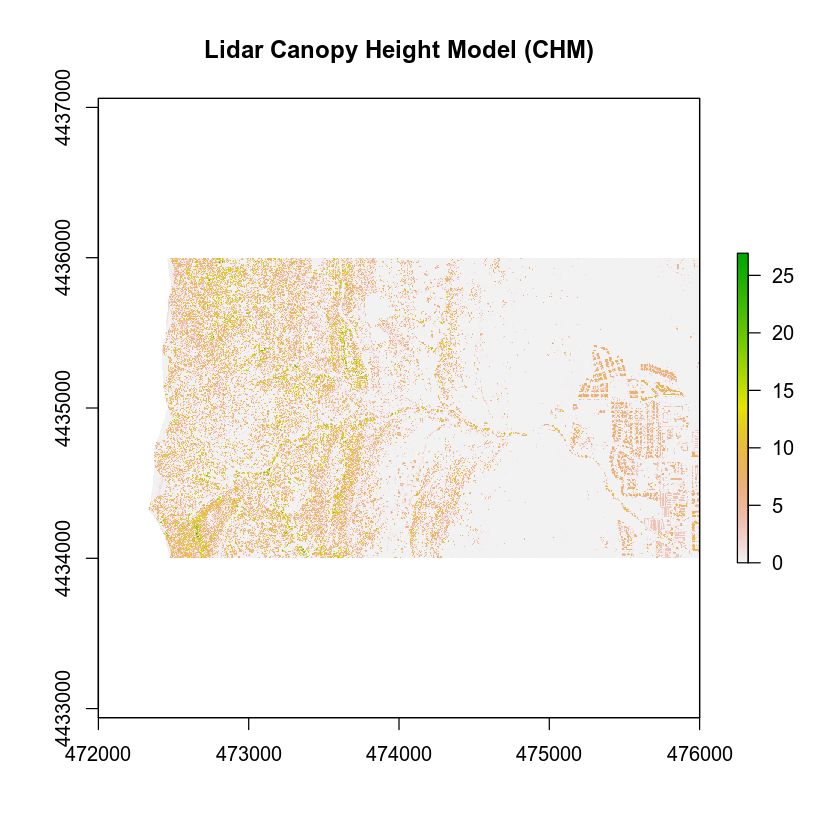 Sometimes a gradient of colors is useful to represent a continuous variable. But other times, it’s useful to apply colors to particular ranges of values in a raster. These ranges may be statistically generated or simply visual. 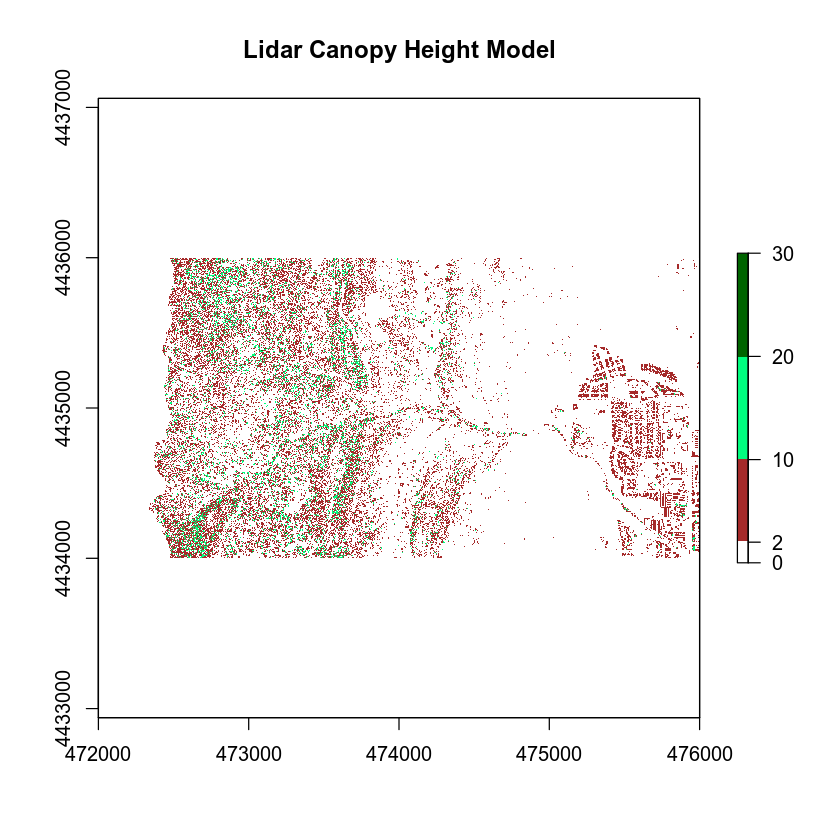 We can export a raster file in R using the write.raster() function. Let’s export the canopy height model that we just created to your data folder. You will create a new directory called “outputs” within the week 3 directory. This structure allows us to keep things organized, separating your outputs from the data you downloaded.

NOTE: You can use the code below to check for and create an outputs directory OR you can create the directory yourself using the finder (MAC) or Windows Explorer.

Data Tip: You can simplify the directory code above by using the exclamation ! which tells R to return the INVERSE or opposite of the function you have requested R run.

Now that you’ve learned about the three common data products derived from lidar data, let’s use them to do a bit of exploration of your data - as it relates to the 2013 Colorado floods.

What differences do you see in canopy height between the two years?

Classify a Raster Intro to the Geotiff